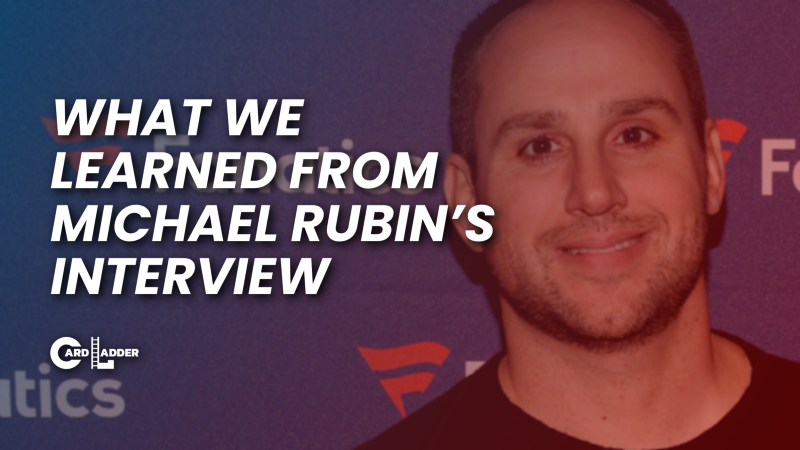 Fanatics majority owner and CEO, Michael Rubin sent shockwaves throughout the hobby today with his exclusive interview on NBC business news this morning. Here are some notable things said by Rubin today

Michael Rubin thinks collecting sports cards is a brutal experience citing the plethora of middle men involved in the process. An outdated and old fashion means of production to get products to consumers.

“This is really about a completely different vision for the trading card industry. If you really think about the collector experience, it’s pretty brutal today. You’ve got to buy primary cards with so many people kind of in the middle of it.” Rubin said.

I feel that is a pretty non-controversial statement as many collectors would agree in today’s day and age of technology, having so many in-between steps to get products to consumers is inefficient, unproductive, and raises costs. Where Rubin lost many collectors it seems is with what followed.

“Then you sell a secondary card somewhere else. You get your cards graded by another party. You store them with somebody else if not your house. This is about our vision to create an incredible collector experience to bring all of the pieces together.”

Rubin seemingly wants to not just create a monopoly in sports card manufacturing but also wants to grade the cards and possibly even allow collectors to store the cards with Fanatics. He said it himself, Rubin’s vision for Fanatics trading cards is being the 1 stop shop for ALL things trading cards.

Despite Rubin not being able to speak much on this topic, it has been one rampantly discussed since the licensing deals came about. The possibility of Fanatics acquiring one of the current companies is real… How real? Well we will just have to wait and see

Michael Rubin’s main point in this interview seems to be pointing out the inefficiencies in the current market. Rubin as a billion dollar businessman and not a card collector sees the current model of sports card distribution and sees it as extremely outdated.

Rubin said, “The traditional trading card manufacturers make close to a billion dollars selling to distributors. When you think about taking this model much more direct to consumer”

The rhetoric from Rubin would assume the elimination of the current middleman/distributors in the hobby. Despite common belief, Panini and Topps sell boxes for a fraction of what large distributors resell them for. Boxes of Prizm hobby basketball are sold by Panini to distributors for under $300 and National Treasures under $900. It is the big distribution companies that hike up the prices of boxes that you see sold for ridiculous amounts. It seems Rubin plans to grow profits but also lower costs for collectors by eliminating the middleman, making direct to consumer options more prevalent. The potential features of Fanatics offering storage and grading would also prove to be extremely profitable, as we see the current demand for these things in the hobby.

Rubin right now seems to have a lot of plans but executing them will prove to be a difficult task. Let’s wait and see what happens before we panic about what might happen 5 years from now.