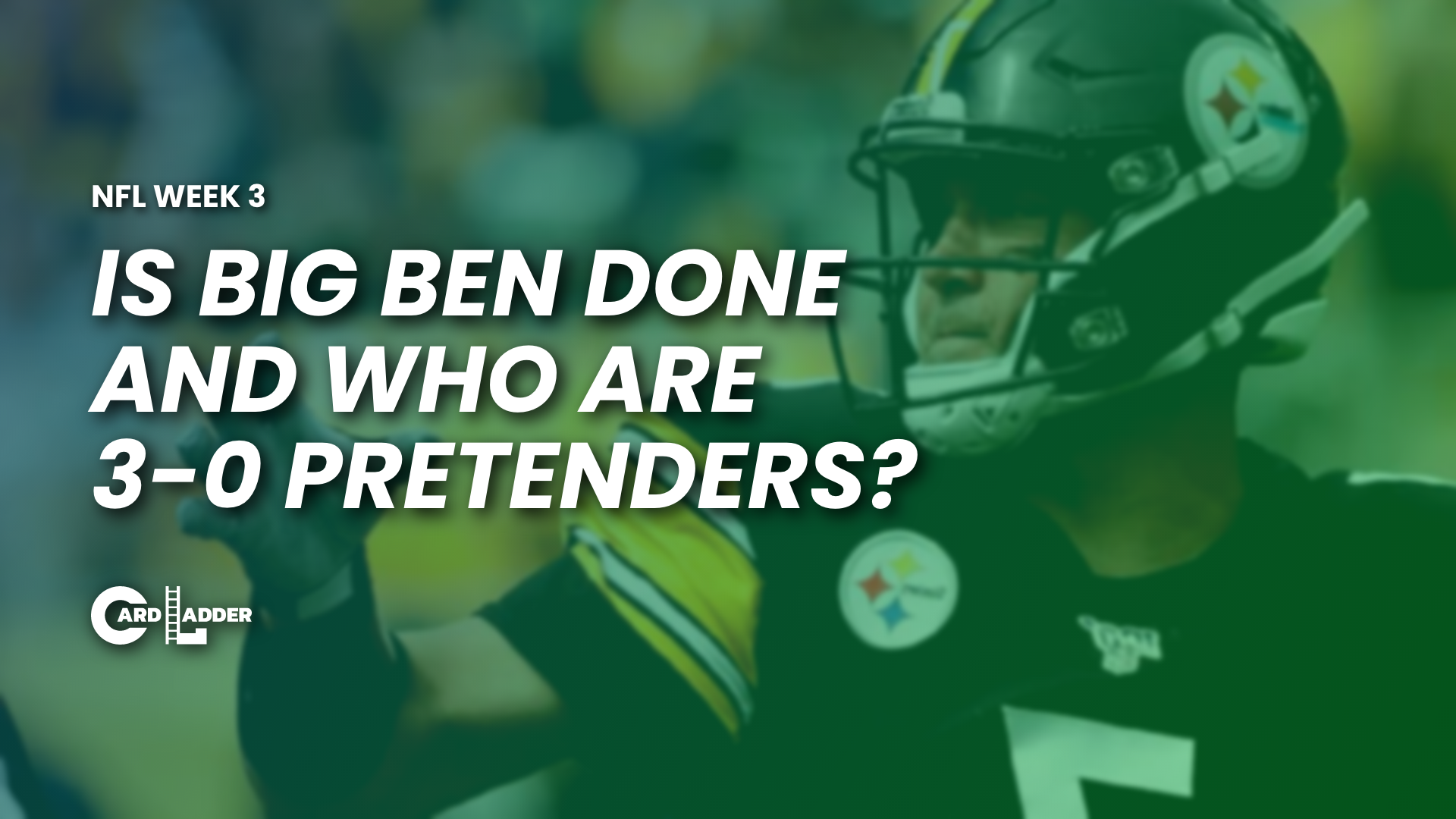 With week 3 of the NFL season happening exactly a week ago today, we have had time to see how the market has reacted leading up to week 4. As we see what teams are for real and what teams are not, the market recognizes this accordingly. The first two weeks of massive increases based soley off the hype of a one game perfomance, seems to be over. The data from Card Ladder shows this as only 3 players this past week saw increases over 1%. For context, the week prior had over 10 quarterbacks with an increase of over 1%. As the season goes on, it should not have been expected for players to see 10–15% increases based soley off 1 performance. Slow and steady gains for quarterbacks on contending playoff teams are what you should expect.

The Sam Darnold revival project seems to be in full swing, the Panthers are 3–0 and going at full steam ahead despite McCaffrey’s injury. With a 59.77% weekly increase, it seems the market believes in him too. Often we see people talk but not their money, this is not the case. Lamar Jackson was the talk of the town over the last 2 weeks yet has a negative market movement. This could be for a plethora of reasons one being people feel Lamar has reached his potential while Darnold is just scratching the surface. Win or lose, Darnold’s market should not see another massive bump as there has to be a cap eventually. Darnold’s market index has risen each of the 3 weeks over 10%

Unlike Darnold, Carr has been a proven commodity in the NFL for well over 5 years now. The only knock on him was the win column was always bare while the losses plentiful. Carr has seen massive increases over the first 3 weeks of the season with an overall monthly increase of 122%. A knock many have on Darnold is the skill level of his opponents, on the flip side. Carr has played excellent defenses and 2 overall solid teams, the Ravens on Monday Night Football and then went into Pittsburgh and beat the Steelers! In one of the toughest divisions in football, the Raiders who were not on most folks radar making a playoff run would be huge for Carr’s market. Should 22% increases be exepcted with each win? Absolutely not but if he keeps it up steady increases will follow.

Whats up with Big Ben?

Many assumed that the Steelers legend and all time great quarterback would have retired after last season but here we are today… The Steelers as a team outside of the quarterback position are elite with a phenomenal defensive unit. Unfortunately in todays NFL, a defense can only do so much while the offense has to contribute in one way or another. Despite having 800 passing yards, the mobility and overall conditioning of Ben has been turned into somewhat of a meme.

In a pass friendly NFL with a loaded receiving core, having a 79 passer rating and 34 QBR is unacceptable. Despite getting embarrassed by the Bengals in week 3, his market is down less than 1% this week and up overall this season. Ben’s market is clearly being propped up upon what he has accomplished on a historic franchise.

Are the Broncos a legit 3–0 or pretenders?

Teddy 2 Gloves has had a career revival in Denver after an underwhelming 2020 in Carolina. The 3–0 Broncos look phenomenal but are they the real deal? Say whatever you want about Teddy, its clear he can be an excellent game manager, he will obviously never be a gun slinger throwing for 400 yards. The Broncos 3 wins have come against the Giants, Jaguars, and Jets who are a combined 0–9… Their first test will come this weekend when Baltimore comes to town. Although the Ravens havent looked great, half their team being on IR would explain that. None the less the Ravens are still an extremely talented and competitive team with playoff aspirations.