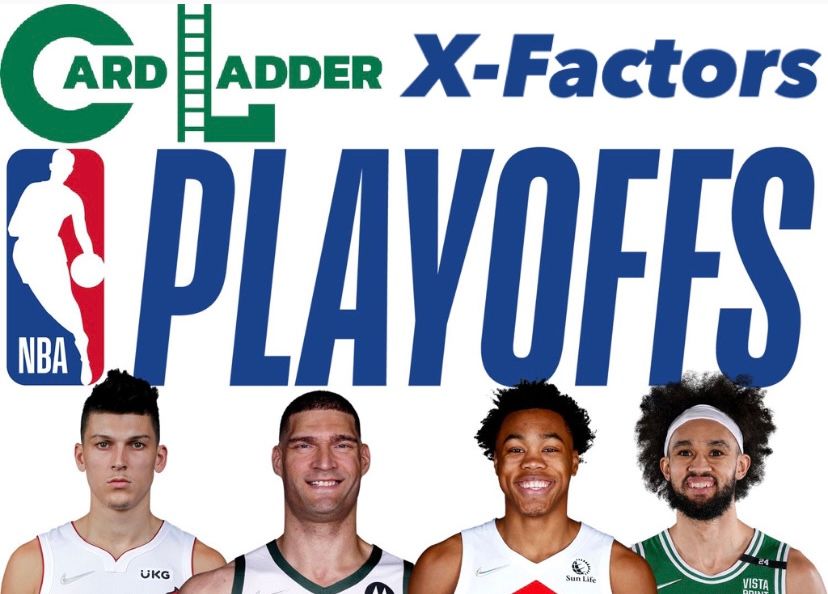 With the playoffs tipping off this Saturdy, many of us know the big names in the hobby but what about the more under the radar sleeper players. While of course a teams playoff success 99% of the time hinges on the teams star player, there is often that x-factor who gives them that extra boost. Players like Pascal Siakam come to mind, who gained national attention for his great 2019 playoff run. Even last season, we all saw Bobby Portis pour his heart and soul into the Bucks championship run. This article is going to shed light on players you might want to keep an eye on for every playoff team (1-6).

After a phenomenal rookie campaign Herro fell off in his sophmore year dealing with a myriad of things. The shortest off season in sports history did not only affect the champion Lakers but also the runner up Heat. In a prisoner of the moment hobby, Herro quickly became irrelevant after last season despite returning better than ever this season. Averaging 21 points per game, 5 rebounds, and 4 assists, Herro is a lock for 6 man of the year. As Miami's sec0nd leading scorer heading into the playoffs, if they want to make a deep run similar to 2020, a large portion of the offense will be oriented around him.

After the Evan Fournier experiment failed miserably, the Celtics decided to make their annual last piece to the puzzle deadline acquisition in Derrick White. The fifth year guard rose to prominence after his 2019 playoff run, where he scored 36 in game 3 vs Denver. With the carousel of point guards from Kyrie to Kemba to Schroeder, the Celtics are hoping that the versatile White can play nice with stars Tatum and Brown. As the Celtics 4th leading scorer, the Celtics truly need White to  be agressive offensively while stepping up on defense. Outside of White the Celtics bench scoring options are Grant Williams, Payton Pritchard, and Aaron Nesmith.

Brook Lopez has only appeared in 13 games this season after suffering a back injury the first week of the season. Brook might not be a big flashy name on a max contract like his 3 co-stars but his contributions to the team are a big reason as to why they won last season. A feast or famine scorer for the Bucks, his ability to stretch and space out the floor does wonders for Giannis. So even when he is not scoring, the threat of his shooting does not allow teams to collapse on Giannis down low. With Giannis missing game 5 of the eastern conference finals and the series tied at 2-2, it was Brook Lopez who stepped up and won them the game. Leading the team in scoring with 33 points, he steps up in big moments. Game 7 versus the Nets last playoffs he went 7-11 from the field and had 19 points. While Giannis, Jrue, and Khris get the credit and rightfully so, it is important to give a tip of your cap to guys like Lopez and Bobby Portis.

Teams are often faced with an ultimatum, you can be top heavy with max contracts or you can be a well balanced team. Ultimately with the Harden trade, the 76ers sacrificed all depth for James Harden. While Tyrese Maxey would be many peoples choices for this, at this point he is arguably the 76ers second best player. Despite him being in just his second year, his level of play and maturity is that of a veteran. Averaging more points than Tobias Harris and just 3 less than Harden, a player like Shake Milton is more fit for this. As it stands now, Shake is the only 76ers backup point guard on the roster. With Matisse Thybulle ineligible to play in Toronto, the 76ers backups 1-5 are Korkmaz, Milton, Niang, and Paul Reed. I have 0 faith or confidence in any of these players unfortunately and I think many feel the same.

5 - Toronto Raptors: Scottie Barnes + Everyone Else

This Raptors team is electric and exciting to watch, as mentioned above teams can go the route of being top heavy or having a comittee of great players. The Raptors have 5 players who can go off any night, with Siakam, VanVleet, Trent Jr., Anunoby, and  Barnes. For the sake of the article, I will focus on standout rookie Barnes but all of the formentioned Raptors are x-factors. They have no 1 dominant offensive superstar but rather a comittee of excellent players who all excel at an area they specialize in.

Barnes as a rookie has been nothing short of phenomenal, with a stat line that makes many veterans envious. The 6'9" forward is extremely unique with an elite ability to handle the ball for someone his size. The one weak point in his game is three point shooting which isn't that bad at 30%. His mid-range is solid shooting 71% from 0-3 feet and 40% from 10-16 feet. What makes this team such a matchup nightmare on paper for the 76ers is who do Harden and Maxey guard?

Yes! That Coby White and not only is he still alive he plays on the Bulls! One of the hobbies favorite investments just 2 years ago has become an after thought. Averaging 13 points per game, he is a decent scorer (inefficient) but offers nothing else. The Bulls beating the Bucks would probably be the biggest upset in a series since the We Believe Warriors but even then the Mavericks did not win a title the year before. By some miracle with Lonzo Ball out, White is going to have to average north of 20+ points per game.