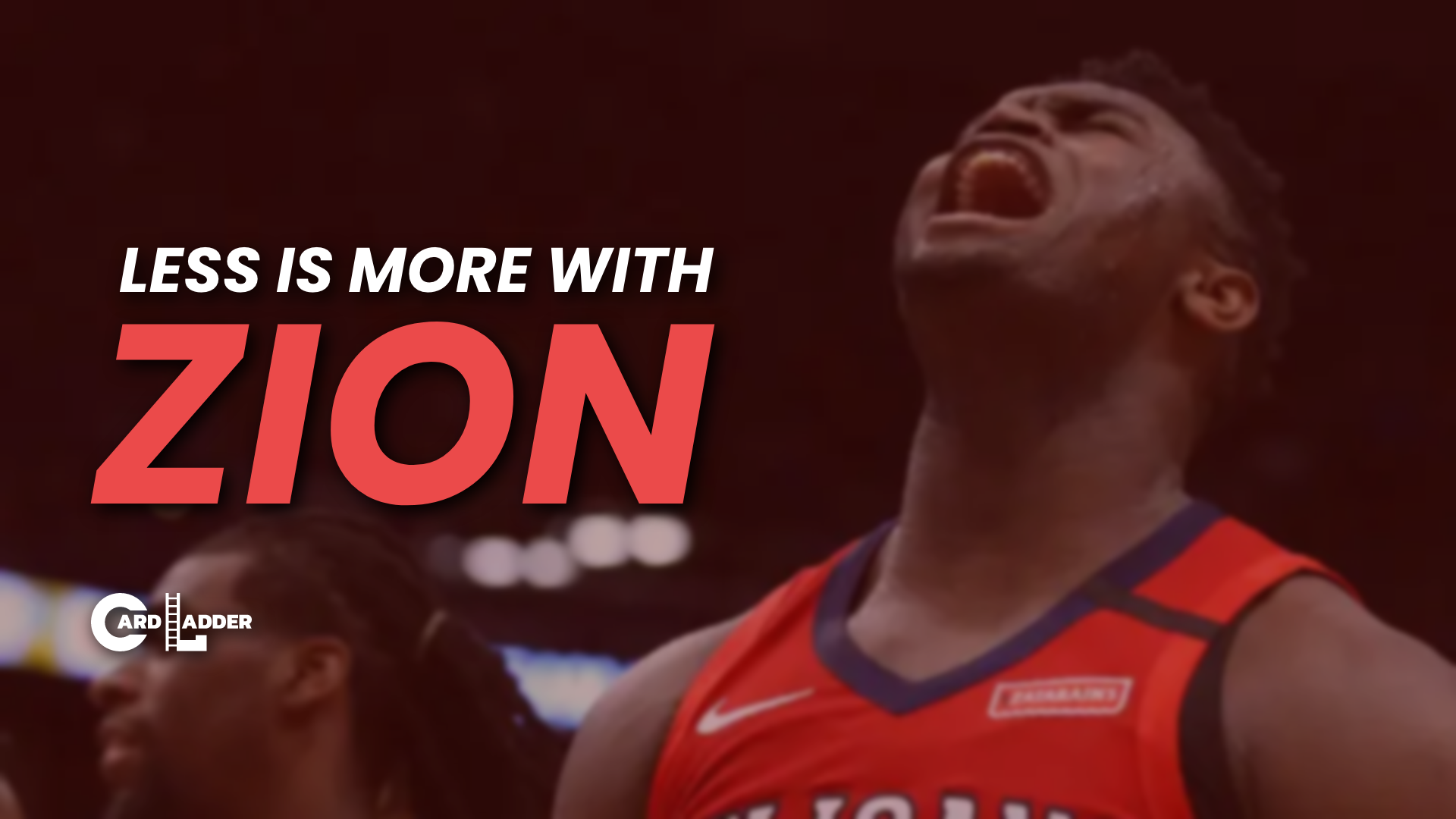 The most hyped prospect coming into the league since LeBron James… Zion Williamson has immense amounts of pressure to meet the expectations placed on him. Struggling with injuries over the last few years, when Zion has played he’s been electric but is he doing too much? Averaging 27 points in his first full playing season some might think that its preposterous to even suggest such a thing but the statistics say otherwise. In this article, we will dive into Zion’s 2020-21 NBA season with the Pelicans and see if Zion doing too much can hurt the team's chances of winning games.

First let’s take a look and understand the construction of the roster:

Stan Van Gundy would be captain of the ship, leading the Pelicans into battle for the 2020 season. Many figured the duo of Van Gundy and Zion would be a match made in heaven considering Van Gundy’s overwhelming success with Dwight Howard in Orlando. The philosophy of surrounding an offensive paint dominant player with shooters seemed to work well once so why not twice? The Magic were top 5 in three point attempts and makes year after year with Howard in the late 2000s and early 2010s. Early on it was clear that this was not going to work for a multitude of factors. The three most obvious ones being; Van Gundy was an outdated coach who did not adjust to the modern era of basketball, Zion was not 1/100000th of the defensive player Howard was, and the Pelicans seemingly failed to surround Zion with shooters. The stability of the Pelicans roster was also a mess with never ending roster changes and rotations. Thirteen different players started games and eighteen players averaged over 10 minutes per game. Despite having a talented roster, this team had no identity or true leader. Brandon Ingram had a breakout season the year prior, averaging 24 points and was an all star which put in question who was the true leader of the team. Lonzo Ball also improved immensely, proving himself as a legitimate starting level guard in this league. The other young core of Jaxson Hayes, Kira Lewis, and Nickeil Alexander Walker often lacked consistent playing time and were in and out of rotations.

If you've ever watched Zion play, he clearly stands out in today's NBA for a plethora of reasons. One being his playstyle, it's very rare for someone of his caliber and notoriety to be a paint centric player. Attempting just 34 three pointers the entire season and making just 10 in 61 games, it stands out when comparing him to other dominant paint players. Despite playing 10 less games last season, Joel Embiid attempted 154 three pointers.

With the rise of the Warriors in 2014, many people including Charles Barkley were in for a rude awakening for what was to come. The era of the mid range was over and the era of the three pointer was here. The math came down to the simplicity of threes being greater twos.

Does some of the blame fall on Zion for the Pelicans being an atrocious three point shooting team?

It’s a lot more complex than a simple yes or no answer but the data would tend to point towards it being the case. The Pelicans offense is run through Zion, who is a ball dominant isolation paint player. Over 69% of Zion’s field goals are attempted from 0-3 feet, with under 5% being from 10+ feet.

Is too much Zion a bad thing?

Too much of anything can be a negative, so this is not to dismiss Zion’s potential or talent but rather suggest that Zion in excess amounts can be detrimental to him and his team.

Looking at Zion’s 2020-21 game log, we can see the results for when Zion attempts 17+ shots (over his average) compared to 16 or less. The results are rather shocking…

This is not an error or typo. When Zion attempts 16 or less field goals it improves the Pelicans chances of winning by 31.1%. For perspective, a winning percentage of 65.38% in the West is a top seed (3rd) with the Nuggets and Clippers both having a 65.38% winning percentage last season. Of course once you factor in a larger sample size playing 46 more games, the percentage is destined to go down. On the flip side, 26 games is a large enough sample size to tell us there's validity in the data.


Compounding problems contributing to this:

It’s almost shocking that Ingram and Zion have developed as well as they have considered their surrounding circumstances. Zion has had a new coach entering each of his three NBA seasons. Ingram entered the league dealing with the dysfunction of the post Kobe Lakers then had to deal with the Lonzo Ball media circus followed by the LeBron James media circus. The Pelicans game plan for Zion’s first two years has just been to feed him in isolation situations. The front office automatically assumed lots of touches would make him happy and the team win.

2. Adding talent that does not fit the scheme

The Pelicans in 2019-20 were an elite shooting team with top 7 across the board statistics but when you introduce a paint dominant isolation scorer you must adjust. A perimeter centric offense centered around Brandon Ingram is much much different than a paint centric offense centered around Zion. The Van Gundy offense in Orlando thrived because they had great shooters surrounding Dwight Howard in; Rashard Lewis, J.J. Redick, Hedo Turkoglu, Jameer Nelson, Ryan Anderson, and Courtney Lee. There is a big distinction between those great shooters and average shooters in Eric Bledsoe, Josh Hart, and James Johnsoon.

This showed as the Pelicans shooters struggled across the board. Only 2 players on the entire roster last season shot above league average 36% from three and attempted over 1.6 three pointers per game (Lonzo Ball & Brandon Ingram).

In addition to this Steven Adams was signed to be the starting center, this did not help the offensive flow/spacing as they would have 2 players on the court who cannot score outside of 3 feet for the majority of the game.

3. The best ability is availability

It is hard to get a consistent rhythm and flow offensively when you aren't sure if your star player is going to be able to play. Zion has missed 59 of 144 games in his career (over 40%). The drastic difference in play style makes it hard for the Pelicans to play a consistent brand of basketball. The offensive game plan changes drastically having Zion in the lineup and having Zion out the lineup. Entering the 2021-22 season, Zion will be coming off surgery repairing his broken foot. For someone his size and weighing in at over 280 pounds, foot injuries can ruin careers so its worth noting.


What has the Pelicans front office done to improve?

Nothing, absolutely nothing… There is not much to be optimistic about heading into this season for Pelican fans. The front office's relationship with Zion is alarming and all signs point to him possibly leaving.

The Anthony Davis debacle ended with him wearing a Looney Tunes “That’s All Folks” shirt, as he sat out his final season in New Orleans. Now, just three years later the same franchise is at odds with its all-star, Zion Williamson. According to NOLA.com, Pelicans general manager David Griffin tried to “forge a bond” with Zion over his rookie season, however, the relationship has since soured.

What’s causing the issue? Zion has been upset with the way the team has handled his injuries and return to play schedules. Zion’s family is also reportedly unhappy with the direction of the Pelicans, citing the front office’s decision to move JJ Redick and tension between Zion and former coach Van Gundy.

Three days ago, we learned this has all been going on while Williamson was recovering from a broken foot. Griffin still is “optimistic” that Zion will be ready for the season opener on October 20th, but it’s hard to ignore, knowing Zion’s frustration in the Pelicans’ handling of injuries.

Ultimately the Pelicans season hinges on the development of Nickeil Alexander Walker’s development. The third year guard has shown flashes of brilliance while also flashes of being fit for the Shanghai Sharks. As it stands now the Pelicans starting guards are going to be Walker and Graham. Ball distribution and movement could prove to be a problem as Graham and Walker both tend to have a scorer’s mentality and have never shot a ball they didn't think wasn't going to go in.

The Pelicans have a 21-38 (35.59%) record when Zion does not play, so clearly the data also shows he is more valuable on the court than off. Based on the data presented in this article, it's clear the Pelicans need to find the sweet spot for Zion. The statistics would show that its under 16 field goal attempts a game but over 10. With Zion’s injury history at every level of competitive basketball, a decrease in usage will potentially help his longevity and ability to have a long career. Despite the comparisons to LeBron, Zion cannot be thrown on a YMCA roster (minus Ingram) and expected to win games. He is literally more delicate but also metaphorically, the franchise needs to surround him with players who compliment his game. The future is bright for Zion but time will tell if a decrease in usage is just what the doctor ordered, once again literally and metaphorically…