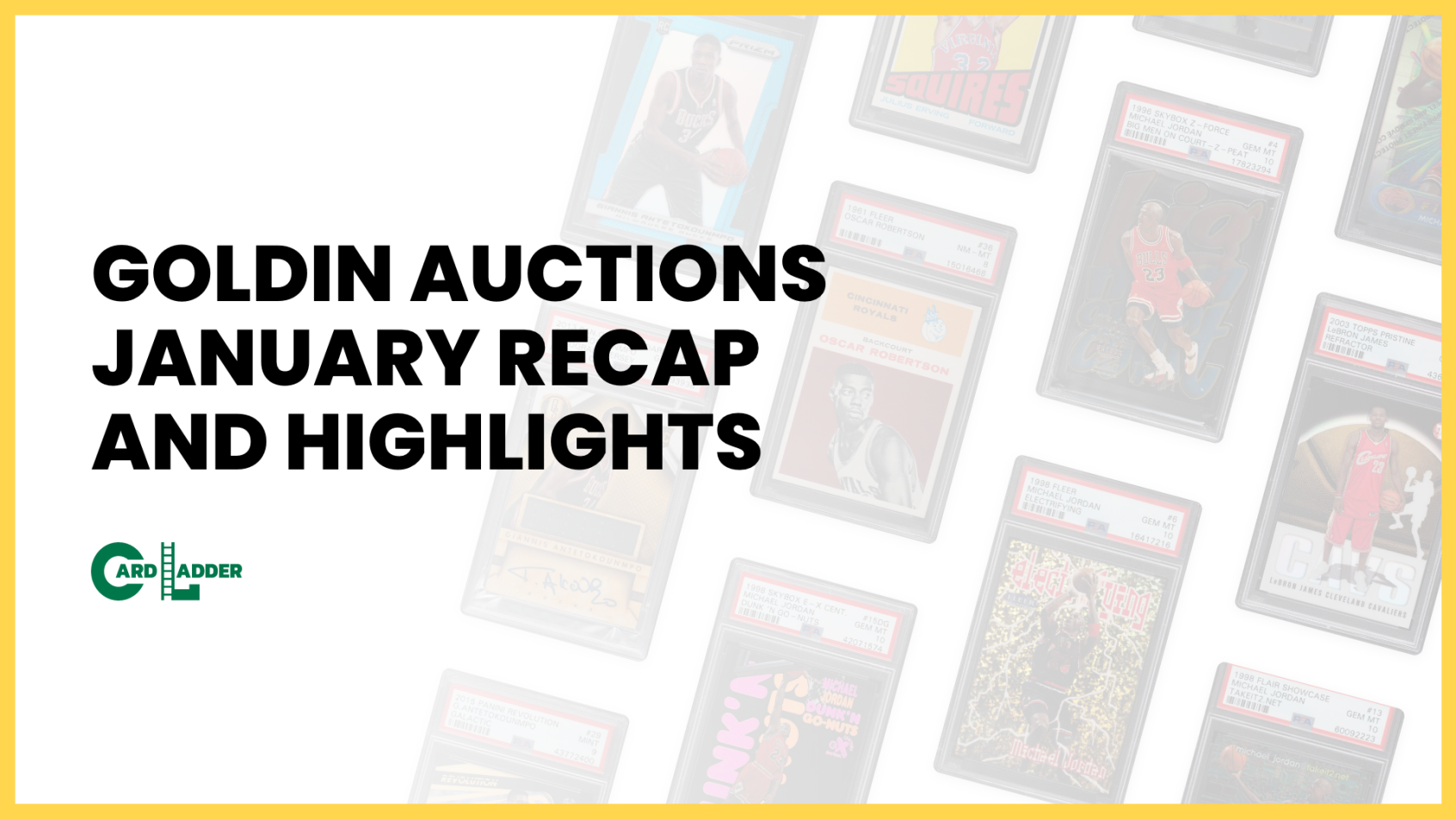 Goldin Auctions monthly auction ended this past weekend and some of the results left people in absolute awe. Over 64,000 bids were placed which is a record for any auction they've ever held. This auction included over $27,000,000 in total sales and 100 record prices with players ranging from Steve Nash to Anthony Edwards to Joe Burrow.

While lot #1 in this auction was a LeBron James Exquisite RPA, that card sells fairly frequently. On the other hand this LeBron James Topps Chrome Gold Refractor has just sold 2 times publicly in the last 13 months. Selling for $319,000 (BGS 9.5) in November of 2020, this card saw a $580,000 increase (181%). A reccuring trend in this auction is that gold refractors seem to be very very popular.

The National Treasures true rookie patch auto is viewed by many as the premier and or cornerstone rookie patch auto. The secondary (often horizontal) and crossover rookie patch autos sell for significantly less than the true. Despite coming from the same product and being patch autos, these have been viewed as the red headed step child of NT RPA's. Of course a premium was paid for the patch and it being a 1/1 but this could be a sign of things to come for the non true NT RPA. With the Burrow and Kyler selling for $96,000 each, that could turn some heads and have people intriguied with the non true RPA's. Looking at the last sales of these cards in their /99 patch form, the Burrow PSA 9 sold for $2,500 and Kyler  BGS 9 $3,000. Do not be surprised if these massive 1/1 sales expose a discrepancy in price that intrigues investors.

Josh Allen's 2018 Flawless rookie shield patch (player worn) auto 1/1 sold for $54,000 in the same auction as Justin Herbert's 2020 Flawless rookie shield patch (not from any event or game) auto 1/1 sold for $204,000. There are many ways to look at this but the most obvious being it is clear Herbert is viewed as the best thing since sliced bread by those investing in quarterbacks. The begs the question of have people given up on Josh Allen to a degree? While $54,000 is still an incredible price, is $150,000 to big of a gap between the 2 quarterbacks? Josh Allen has struggled recently which could be an explanation for this price discrepancy. A low light of Allen's included a 3 interception and 17 QB Rating game vs the Falcons a few weeks back...

To be fair statistically speaking they had pretty similar seasons across the board even with Allen's recent struggles. The most glaring disparity comes in the rushing category which can simply be explained by comparing Austin Ekeler to Devin Singletary and Zack Moss...

Using Card Ladder sales history tool, we can see the 4 highest selling Josh Allen cards of all time. What immediately sticks out is that the National Treasures version sold for $150,000 more in the early off season. Even a Contenders Optic HGA card sold for $30,000 more than the flawless rookie logo shield... Barring a Chernobyl size meltdown in the playoffs and what should be a relatively easy win over New England at home this card could be the best deal in the short term.

Have people officially lost their minds on Prizm gold?

Anthony Edwards had tons of massive rookie cards for sale in this auction and 1 stands out more than the others. Edward's Prizm gold /10 sold for a significantly higher price than the Optic gold vinyl 1/1 PSA 10/10. Prizm has become Panini's cornerstone brand which has people anticipating its release every year. Originating in 2012 the only numbered variation in Prizm was gold and since has become a collectors favorite parallel in all Panini products ranging from Select to Certified. Does its popularity and historical significance to Panini's brand justify the high price tag compared to other cards? Or can the other cards be viewed as undervalued in comparison to the Prizm gold? While the pump for Optic to catch up to Prizm in early 2020 failed, it is still surprising to see arguably the best card in the entire product sell for $100,000 less than arguably Edwards 4th or 5th best card in Prizm. Clearly brand notoriety has and is playing a major part in the sales of these rare Prizm cards.