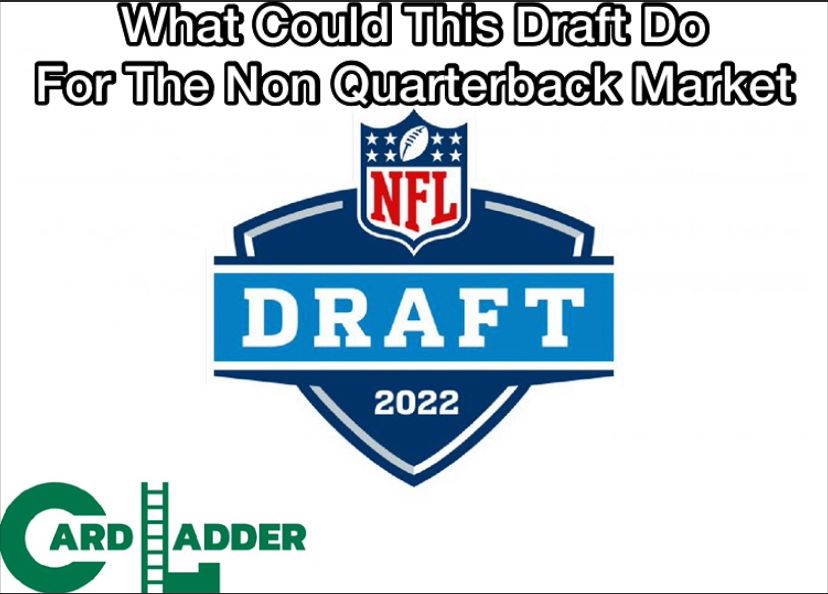 It is inevitable that breakers, investors, card stores, and others will have to find an angle to sell/promote the 2022 NFL products. Typically since the sports card boom, the selling points have been pretty easy with all the quarterback talent out the gate. 2017 offered us Mahomes, Watson, Trubisky, 2018 had Allen, Mayfield, Darnold, and Jackson. 2019 of course now is a lot weaker but at the time Daniel Jones, Drew Lock, Jarrett Stidham, and Dwayne Haskins all had tons of hype with of course Kyler always perfoming. 2020 and 2021 were absolutely loaded out the gate with Herbert and Burrow perfoming at an all pro level. 2021 has yet to perform but the prospect of 5 quarterbacks taken in the top 15 has satisfied the demand.

Could we possibly see a narrative shift in a positive light towards skill position and even defensive players? If we had the sports card market of 2020 and early 2021 then the base market of veterans would likely offset this. Now ultimately with PSA cheapest grading option at $50 and the base market taking a nose dive, it does not make the 2022 line of products any easier of a sell.

Seemingly every season across the three major collected sports, a comparison is done on some social media platform of the rookie prices vs proven all-star active hall of fame talent. With this draft being receiver and defensive edge heavy, could it be at all possible people start to view guys like Aaron Donald and Jalen Ramsey historically undervalued based upon what Aidan Hutchinson and Derek Stingley start to sell for?

For baseball Check Out My Cards made a post comparing Bobby Witt's Bowman Chrome auto vs Mookie Betts Bowman Chrome auto. Bobby at the time had yet to play a game while Mookie is one of the most decorated players in all of baseball.